A rare tale of rain in SoCal. The wet just added to the adventure.

“A wiser fellow than myself once said, ‘Sometimes you eat the bear, and sometimes the bear eats you.’ ”

— The Stranger, The Big Lebowski

It’s been warmer than usual in California this spring. Maybe that’s not surprising, it always seems to be “warmer than usual” in California, or at least commonplace to complain about the heat when the rest of the country is still thawing out. Expecting the usual, mild weather, a small group of Jenson USA employees set out on an overnight bikepacking / touring / call it what you like trip into the San Bernardino Mountains. We had everything planned well in advance. The basics being that we wanted to ride bikes and go camping, an experience some had already attempted and others were looking forward to exploring. We went back and forth on potential routes and campsites for a while and eventually settled on a mixed terrain route that would take us part of the way up the mountain toward Big Bear Lake.

The plan was simple. We’d take Highway 38 for a while, then cut over at Loch Leven / Old Hwy 38 to avoid car traffic and indulge in some mixed terrain fun and take in what promised to be a breathtaking view on a haunting remnant of California transportation history. Then, lunch in Angelus Oaks, and a pit stop at the convenience store to gather essentials like beer and snacks for around the campfire at Barton Flats Campground later that evening. All in all, not an overly ambitious trip.  We’d spend the day climbing and cover about 30 miles and approx 6000 ft of elevation gain. In the morning, we’d have it easy and coast back down Highway 38 into Redlands and be home before lunch.

Nature had other plans.

There we were, in the middle of a historic drought, and it rains on the one weekend we’re headed up the mountain, loaded with camping gear no less. We’d seen the weekend forecast and brushed it off. These things tend to blow over or fizzle out before they even get started in Southern California. We figured, at most it would rain for a bit then clear up mid-afternoon. Wrong. If you’ve followed Jenson USA for awhile, it’s likely you’ve come across one of our company mantras: Adventure Awaits. On this weekend, Adventure wasn’t waiting for anyone, it was walking about proudly giving out one cosmic wedgie after another.

We all arrived nervous about the clouds, but decided we’d run the risk.

The six of us met in Redlands, cobbled our gear together, made some last minute adjustments, and hit the road mid-morning. I had been looking forward to this trip since its inception. In the last two years I’ve completed a few short bike camping trips, nothing too serious, just local overnight routes on pavement with camp stops near the beach. This would be my first experiment with an off-road touring route and the rest of the group’s first venture into bike touring in general. I was anxious to spread the bike travel bug to some of my co-workers and even more excited to get away for a weekend of good vibes and great riding.

One last stop on the way up to Loch Leven

Everything started out great. Traffic on the way to the mountains was mild, conversations were flowing, and we were all looking forward to the rest of the weekend. The temperature was near perfect. Not too hot, not too cold, and lots of cloud cover keeping the sun at bay. We made our initial push up Highway 38 and out of Redlands, with a brief stop to take a group photo, because what trip isn’t complete without heavy Instagram coverage. One bathroom break at the ranger station and a few awkward looks from passersby and we were on our way upward again. It was a slow grind as we tried to stay together. The purpose of the trip was the destination, not setting personal records or killing ourselves on the ride up. We pressed on, taking occasional breaks to cope with the added challenge of riding uphill with more weight than normal strapped to our bikes. Rain came and went as we continued up the highway, unable to make up its mind about whether it wanted stick around for the extended journey. If anything, it felt more like a broken lawn sprinkler than a force of nature. Things changed when we veered off the pavement.

Happiness is a cold burrito

We regrouped at the opening of the Loch Leven / Old Highway 38 entrance, straddling our bikes and refueling with snacks before venturing off-road. The drop in air pressure was palpable and verified every time the barometer on Steven’s watch rang an alarm, almost like it was reminding us to reconsider. We pedaled forward on the patchwork mix of broken pavement and dirt that is  Loch Leven trail, into a beautifully haunting mountain scene akin to something seen in a Rapha video, with less film grain and grunting when experienced in person. Spirits remained high, suffering at a minimum, and moisture consistent as we forged ahead.

The Loch Leven stretch of the ride is about 8.5 miles long and includes a few stream crossings and short hike-a-bike section. Each stream crossing served as a symbolic reminder that we were passing into a wetter and decidedly more foolish stage of the journey. By the time we had helped each other carry our heavy laden and soon to be water logged camp rigs up and over the hike-a-bike, getting wet was hardly an issue because water was everything present and future in that moment. Rainfall moved from moderate to downright torrential as we crawled along, fully utilizing granny gears as necessary. The temperature continued to drop as we gained more elevation. The pleasant 75 degree start to our outing was a fading memory as layers were extracted from bags and grumbling ensued. Stops to find shelter under tree cover and briefly rest our legs became more frequent until temperatures neared 40 degrees and it made more sense to keep warm by keeping moving.

At this stage of trip the group started to spread out. For a while, I was alone somewhere in the middle, close enough to know where the others were but far enough to feel a little stranded. Surrounded by mountains and valleys on all sides, as the storm gurgled and took control, I was overcome by a sense of smallness. I felt helpless against the power of nature and was humbled by the small outbreak of chaos that was forming. Make no mistake, peril was no where near “To Build A Fire” status, but this change in my normal suburban routine was enough to prompt me to stop and think about about the profundity of the natural world. I live so much of my life in control of my surroundings, unwilling to budge and almost proud of my natural bent toward stubbornness. While at times uncomfortable, this experience of being out of control, or rather, having control taken away from me by a force much greater than myself, was liberating in the sense that I had no choice but to accept my role in it all and continue on toward the destination, dealing with new physical and weather-related challenges as they came.

By the time we reached our previously scheduled lunch stop at The Oaks Restaurant in  Angelus Oaks, morale had hit an all-time low and the only thing anyone was interested in doing for the rest of the day was eating too much lunch and refueling with coffee and beer. We were 18 miles into the journey and with 12 more to go, the logic was, “If our gear isn’t completely soaked already, it will be by the time we finish unpacking and set up camp.”  The dropping temperature helped make the decision as well. Many of us were already in our warmest layers and those layers were far from dry. Fortunately for us, we weren’t all that far away from our starting point and we unanimously decided to cut the trip short and call for backup.

Taking over the Oaks Restaurant porch.

Looking back, it wasn’t such a failure. We tried something new and got caught in a storm. That’s just what happened. It wasn’t all rain and suffering. We spent a whole day facing challenges together, telling jokes, and strengthening our little cycling community: one switchback, one sandwich, one mumbled expletive at a time. I’m grateful for the opportunity to expand my cycling experiences with others who share my passions and I’m looking forward to our next trip. Success, failure, or somewhere in between.

A big thank you to the Oaks Restaurant for letting us get almost naked on the porch of your family restaurant while we changed into dry clothes and for serving up some seriously good comfort food. I’d also like to give a shout out to the bears of the San Bernardino mountains for leaving us alone and not complicating a complicated trip any more than it already was. And finally, a giant high five to Sam’s dad for bailing us out, like all cool dads do when their kids (even the grown-ups) do something stupid. 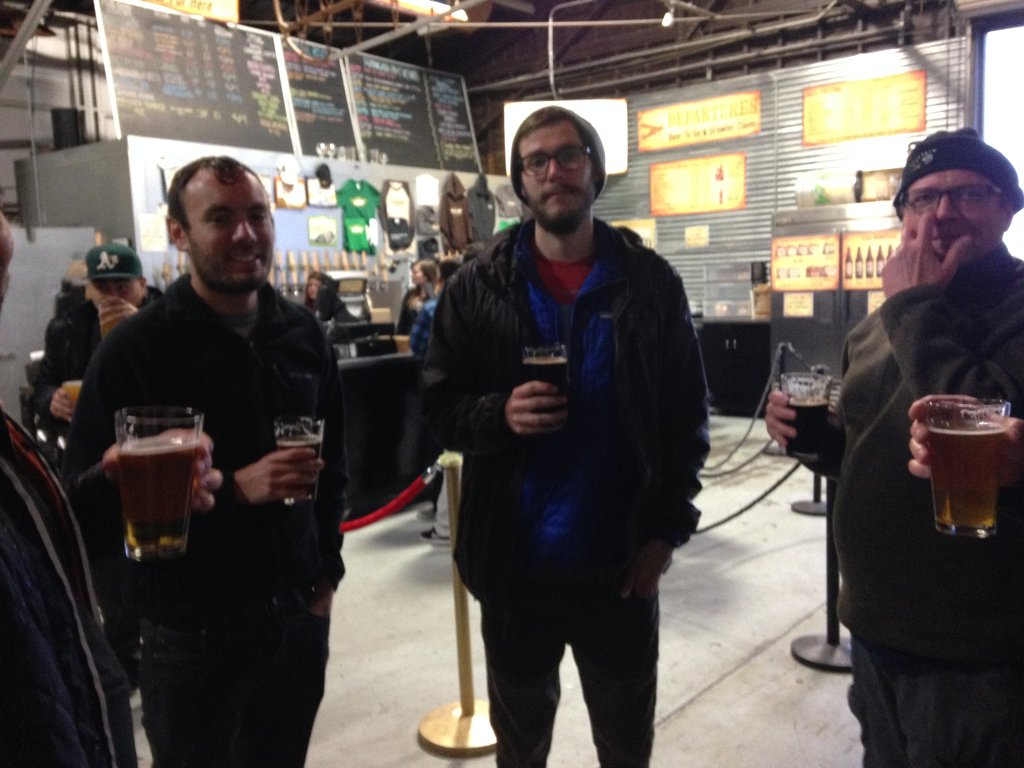 Beer: the duct tape of failure.

Brandon, thanks for sharing your adventure. -Bob

This poitnsg knocked my socks off