It’s hard to try on every mountain bike shoe on the market, so we put the Five Ten Kestrel to the test for you. 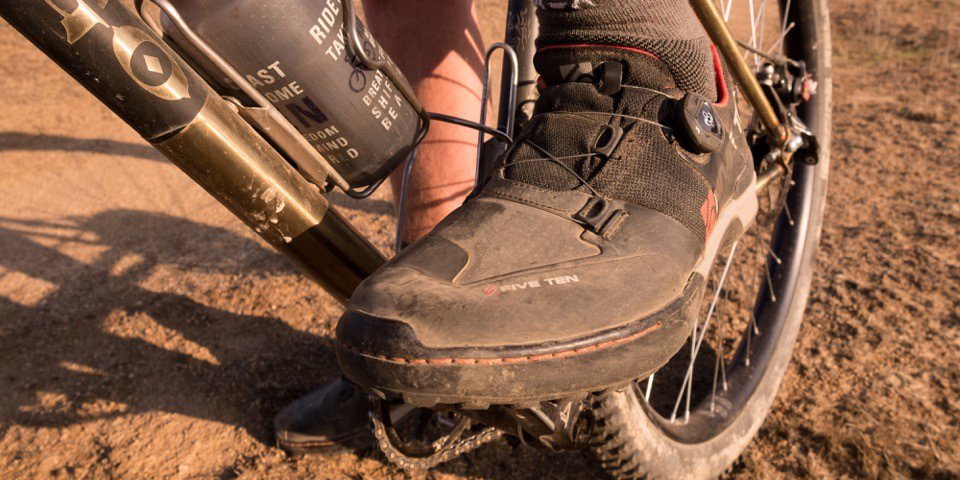 First Impressions of the 5.10 Kestrel

Out of the box the 5.10 Kestrels are some sweet looking shoes even if they are a bit of a departure from 5.10’s traditional styling. They are sleek looking, almost sexy with the minimal boa system and narrow profile. You can get them in any color as long as that color is black, and for a mountain biking shoe that is really the only color you should be rocking. I am coming from some Mavic Alpine XL’s which are almost fully white and look like they were designed for the enduro racing Storm Trooper market. Don’t get me wrong, that is awesome, but being as I am not one for cleaning my shoes after every ride, they got dirty and very off-white, hence the black rubber and mesh color scheme is a change that is welcomed. If Darth Vader were a mountain biker, these would be his shoes. 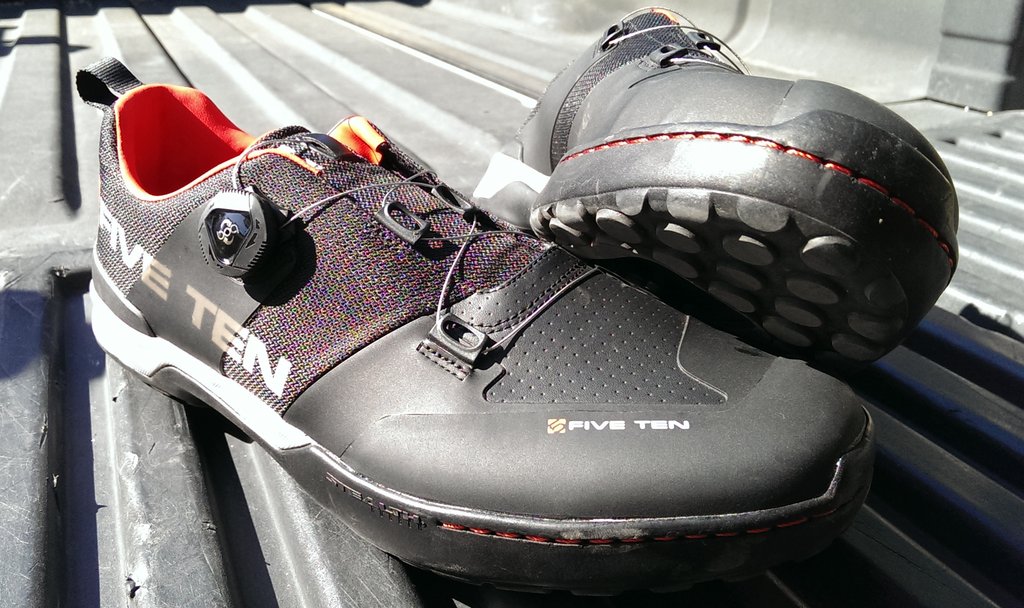 I wear a size 12-13 shoe depending on the company, and the size 12 Kestrel fits great. My narrow foot fits the narrow profile of the shoe really well and it’s nice to not have to tighten the laces all the way just to feel secure. If you are someone who has a wide foot you might find the fit just a bit snug. The unique method of lacing up the shoe, or should I say ratcheting, is one of the key features that sets this shoe apart from the majority of other options currently out on the market. It employs the BOA system that has been used on a variety of shoes and products across multiple disciplines ranging from wakeboarding to golf. The BOA system is a well tested system that can handle water, snow, heat and high stress, and should prove just as capable in the world of mountain biking.

One problem that I noticed with the BOA is that it tends to tighten over the top of the foot above the arch, and then not tighten up the front toe area as much as I’d like. With the BOA, not only can you ratchet it tight but you can also incrementally back it off to dial in the fit. This appears to be an issue an issue that will somewhat resolve itself as the shoe and lacing system break in.  Once I get a few more rides logged to break in the shoe and figure out the sweet spot, I don’t expect any long term issues.  However, it would be cool to see a version of this shoe with 2 separate BOA ratchets; one for the toe box and one for the arch of the foot.

The shoe has a lower ankle profile that is nice for some cooling effect and flexibility, but the downside is that you will get more trail debris inside. This is one downside compared to the Mavic Alpine XL which has a higher ankle along with an even higher neoprene collar that does a good job, though still not perfect, of keeping out rocks and dirt. At the end of the day, you’re still a mountain biker so you shouldn’t be afraid of a bit of dirt. 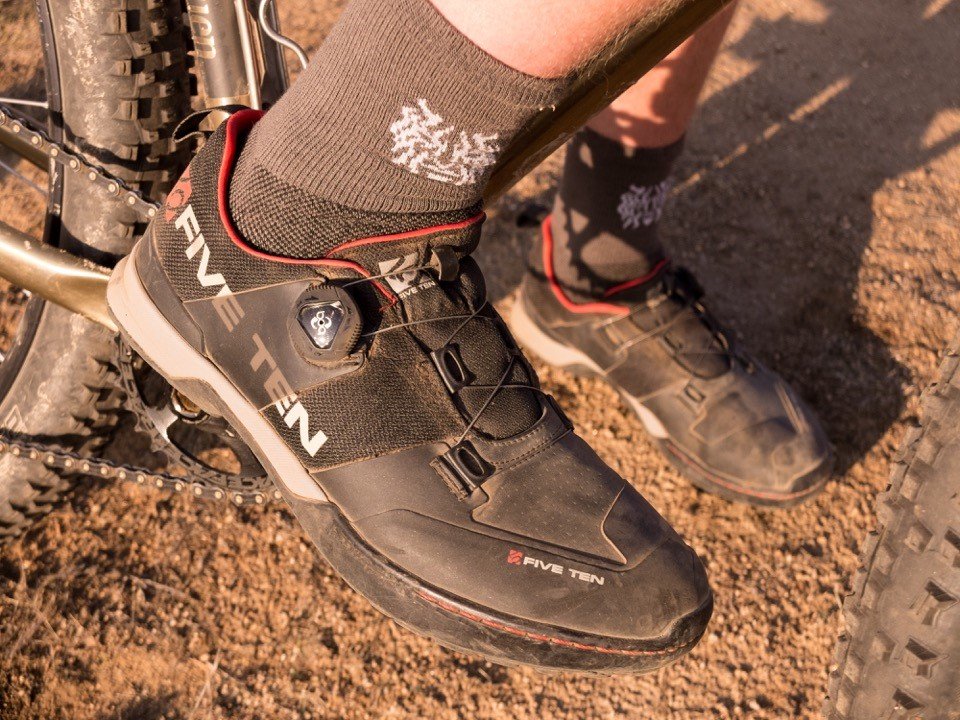 More fashionable than most shoes whether clean or dirty

My riding impressions of these shoes has been stellar. I am currently using them with a pair of older XTR pedals that don’t have any extra platform to deal with. They click in cleanly with no clearance issues of the cleat getting hung up on the thicker portions of sole. I have heard of the shoes getting hung up on pedals with platforms and pins, but this can likely be fixed with some spacers or minor surgery involving a razor. The sole of the shoe uses a combination of two of Five Ten’s legendary rubbers which does not disappoint. The toe and the heel of the shoe is swathed in the ultra grippy Mi6 rubber for maximum traction, while the harder C4 rubber encompasses the patch around the cleat.  This allows the cleat easier entry and exit from your pedal and increased power transfer to your cranks, while giving you insane grip when you have to hike-a-bike to that next epic drop in.  I can see the advantages of using them with a cleat/platform combo, and I may go that way in the future. 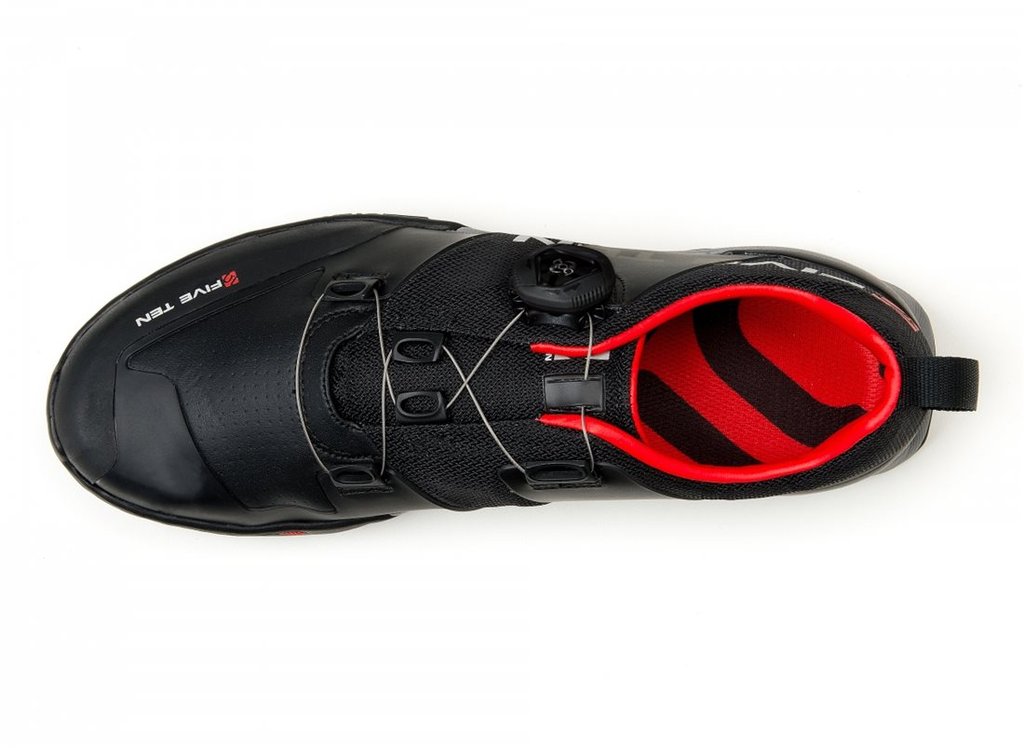 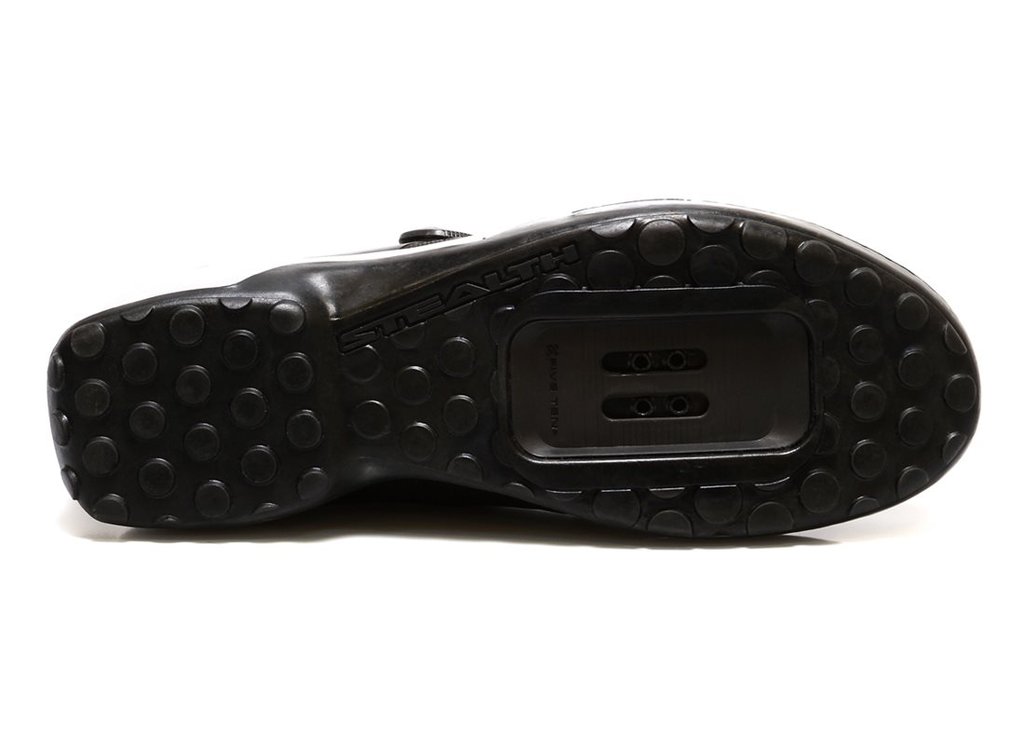 5.10 has put a carbon fiber sole inside the shoe which provides great stiffness and power transfer during pedaling. I can really feel all my 10’s of watts going straight to the cranks. That’s not a typo, that’s just how much power I can put down when I’m in full beard pace mode. Impressive, I know.

While the carbon sole makes for a great pedaling platform, the Kestrel is not quite as comfortable as other 5.10 shoes as a post-ride walk around shoe due the additional stiffness.  As I generally find walking only 1/274th as fun as riding my bike, I don’t really see this as an issue. 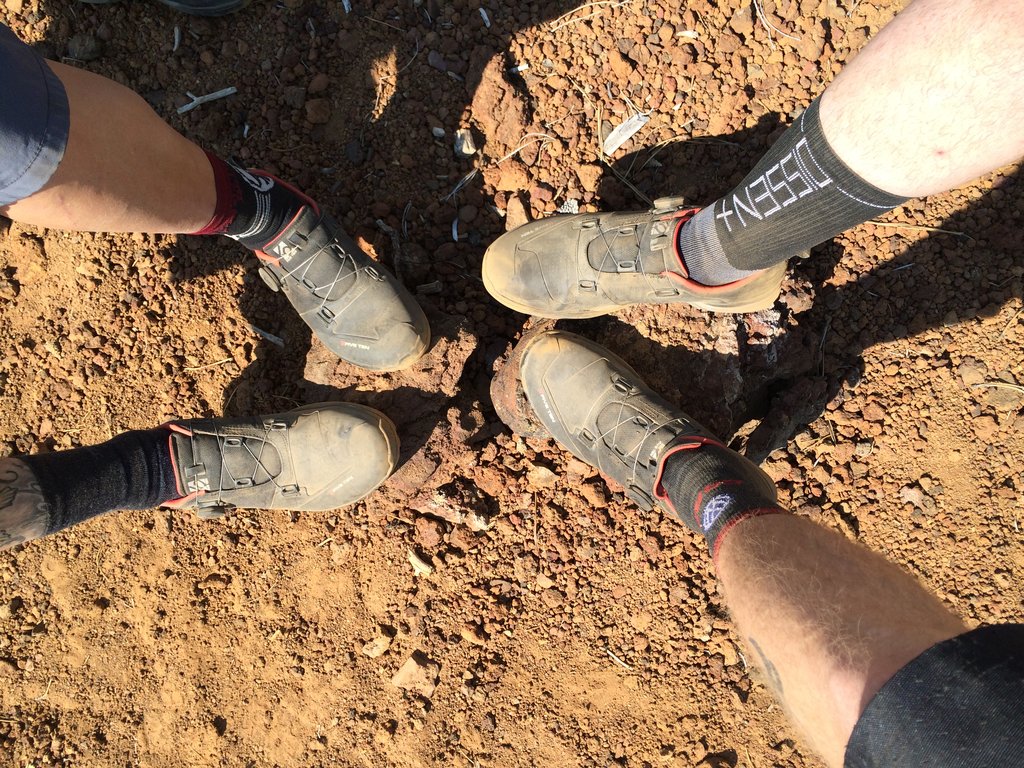 I’ve put a handful of short rides in on my local trails, as well as a 27 mile day up on Skyline trail in Big Bear, CA. Besides the minor gripe with lace tension and the dirt-loving low ankle, I’ve been extremely satisfied with these shoes. Compared to the basically Fort Knox equivalent of laces, then Velcro, followed by a cover flap of the Mavic Apline XL shoes, these are extremely quick to put on. Fit is good, pedaling is great and durability feels like they will handle some abuse. I’m hoping to get some park laps in and really test the aggressive riding capabilities of these shoes. So far, they’re worth the money. So, if you’re ready for a change, definitely give these a strong consideration.

Add Style & Function to Your Feet 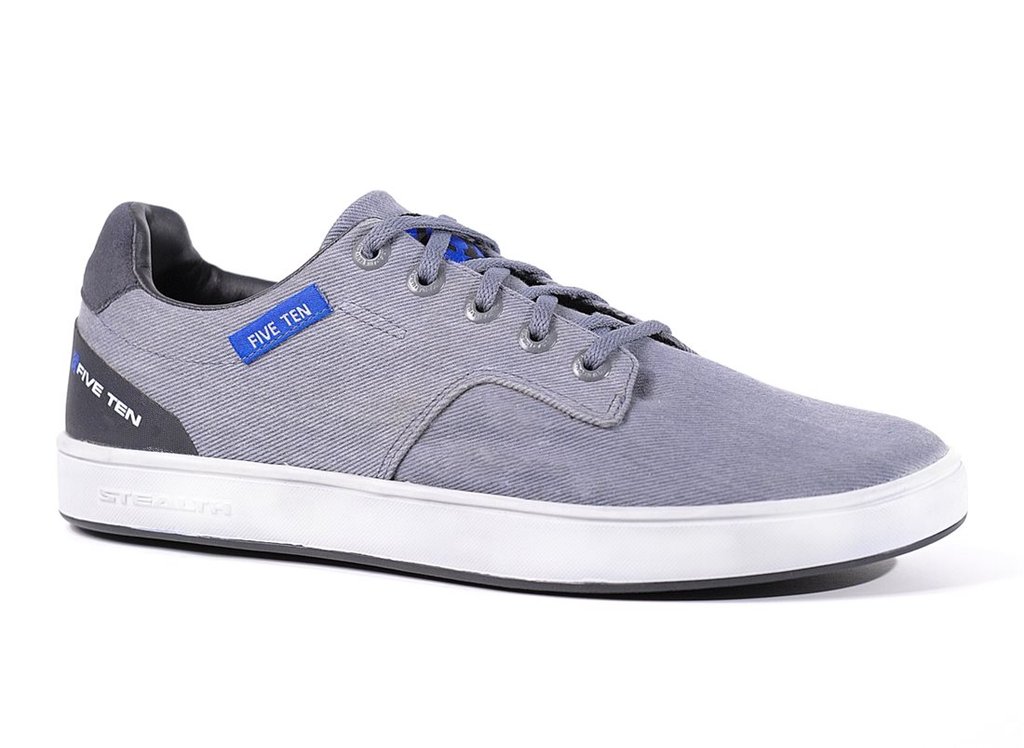 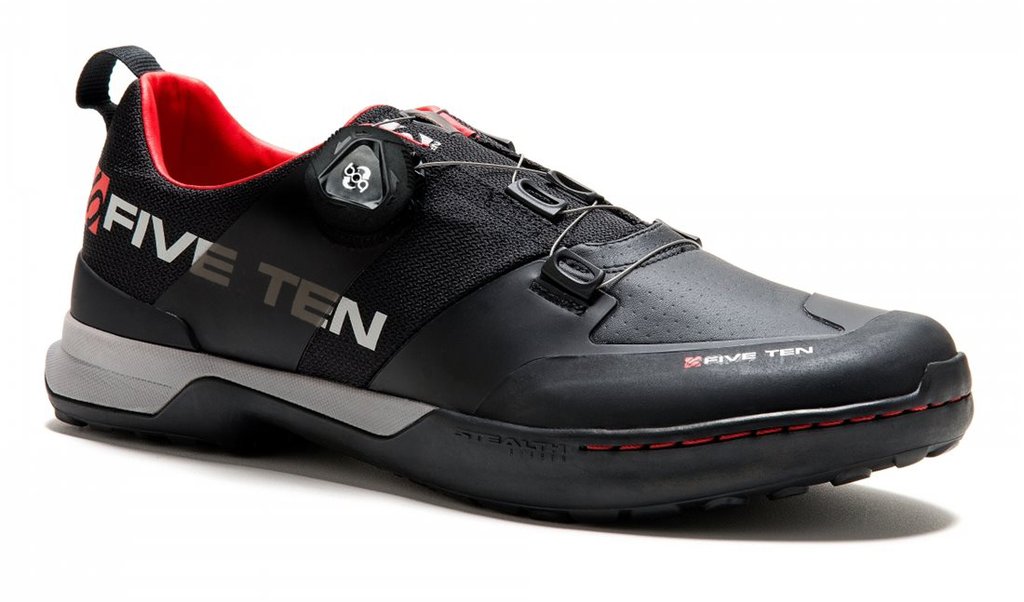 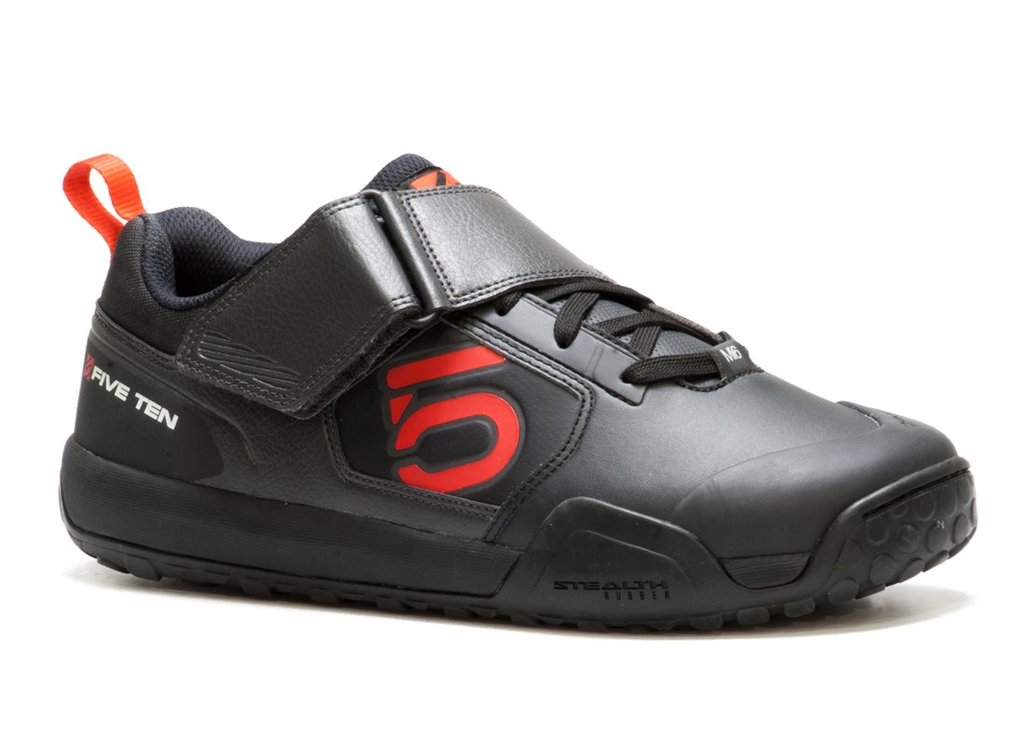 How abut a few words as to how they perform clipping in and out? How they grip on the pedal when unclipped, how hard it is to clip back in when your flying through the rough, and other sundry dh related issues. I’m sure they pedal great…

Jason touched on this briefly, but as he is riding on a platform-less XTR pedal the rubber wouldn’t have much affect on clipping in and out. He is planning to do a long-term update, and is looking to try them out with some platform SPD pedals. Keep an eye out for the update.

I have the old Crank Brother Mallet 1 and I am having hard time unclipping due to the effective soil rubber. I also have used the Kestrel in platform pedals and they are work like a charm!
Lastly, I am not supper thrill with the insole. Clipping in, I get a lot of numbness in my ball feet. Also they do not provide a good arch support like Specialazed insoles..